Overlooking the world renowned 17th at The Old Course, since 1968, sits the only PGA-approved Pro Shop in St Andrews. Whether you are a seasoned pro, a complete beginner, or simply seeking the perfect memento with our official Old Course Logo, be sure to visit us at the Pro Shop located on the famous Old Course St. Andrews.

The PGA Pro Shop holds the longest established logo for the Old Course itself, although it may have evolved slightly through time. We proudly stamp our merchandise with this logo on the left chest of clothing, the front of caps and in the centre of our accessories.

If you are wondering the significance of the Lion Rampant, and why this is still currently featured in our logo and across all of our products, the following should give you a brief insight to the history behind this Royal Scottish symbol. 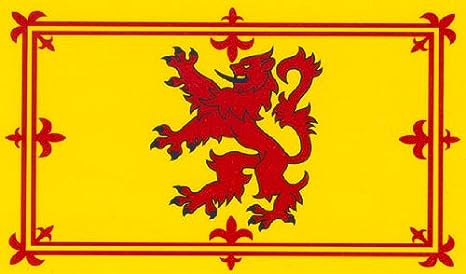 This is what is often considered the unofficial, National or Royal Banner of Scotland, it is raised at Royal Residences when the head of state is not present. The flag legally belonged to the monarchy, however there has not been any royalty in Scotland since around the 17th century and it was therefore passed on to Queen Elizabeth II of England. Technically, it is illegal to fly this flag from a building or flagpole unless you have seeked out special permission to do so!

The term 'Lion Rampant' refers to the attitude of the lion and it's appearance as if about to strike, it has also been referred to as "The Lion of Bravery" and "William the Lion" when used as part of battle flags and banners from as early as possibly 1143-1214 AD. The first official record of this design being used, dates back to 1214, when it appeared as a coat of arms on one of King Alexander II's seals as a symbol of the Scottish Kingdom.

The Lion Rampant has been featured in all of the Old Course logos, proudly holding the course flag for the famous 17th Road Hole, known as one of the most challenging par 4's in Championship golf. This logo can only be purchased directly from ourselves in store or online, we guarantee official branding, five star customer service and only the best quality merchandise for your enjoyment and satisfaction. One thing we cannot guarantee is to lower your score on the course!