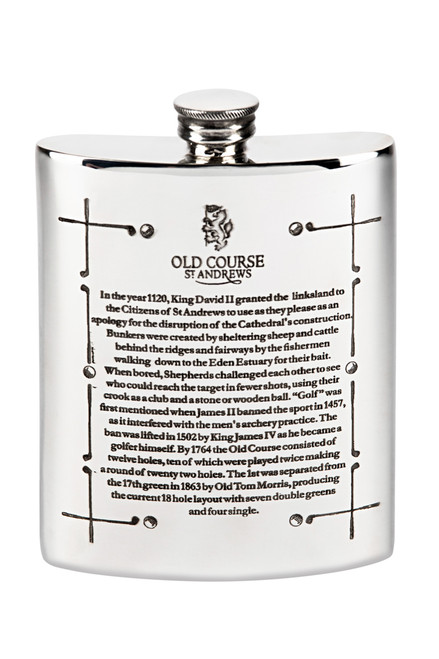 This 8oz Pewter Hip Flask has been exclusively designed for the Pro Shop, proudly displaying our Old Course logo at the top centre, and presented in a black gift box. The engraving on the front reads:

'In the year 1120, King David II granted the Linksland to the citizens of St Andrews to use as they please as an apology for the disruption of the Cathedral's construction. Bunkers were created by sheltering sheep and cattle behind the ridges, and fairways by the fishermen walking down to the Eden Estuary for their bait. When bored, shepherds challenged each other to see who could reach the target in fewer shots, using their crooks as a club and a stone or wooden ball. "Golf" was first mentioned when James II banned the sport in 1457, as it interfered with the men's archery practice. The ban was lifted in 1502 by King James IV as he became a golfer himself. By 1764 the Old Course consisted of twelve holes, ten of which were played twice making a round of twenty two holes. The 1st was separated from the 17th green i 1863 by Old Tom Morris, producing the current 18 hole layout with seven double greens and four single'

The rear of the hip flask proudly displays all St Andrews Open Champions from 1873 right though until the most recent open in 2015.